As your archive grows in size you will be concerned about it's sustainability. To help prepare, an example backup script is displayed below which is used to backup the critical parts of your server for use in the case of recovering from a disaster.

The output of the script should be copied to an another server in another physical location. There are several software and hardware backup systems available to do this. At this University we use the IBM Tivoli tape backup system. An agent is installed on all our servers which is used by the master to pull in all the data from the /opt/backup folders on the institutional repository servers.

Create a credentials file for the postgres or dspace user. See:

Open a terminal on the server and type the following:

To become the postgres user.

To create the credential file type.

To lock down file permissions type.

Copy and paste the following into the file:

Press CTL+O and CTL+X to save and exit the file.

You should be connected to the database now.

To quit the database type.

Save and exit the crontab editor.

Now copy and paste the following to the /usr/local/bin folder as backup.sh on your server and modify the backup variables to suit your location and server.

After you have completed the above, you can start a backup anytime by typing the following as the root user:

Then check the files in the backup folder by typing the following:

The intention is to backup the files in /opt/backup to a remote backup server. On our campus we have a server in a secure location for housing the remote backups. This server has a very large RAID disk storage and has Ubuntu 8.04 LTS installed. BackupPC is installed on the server. BackupPC uses the rsync method for pulling in the backups from the clients.

Each client to be backed up must have an rsync server running. See below for an example /etc/rsyncd.conf config file:

Replace %my-backup-server-hostname% with the hostname of your backup server.

Now enable the rsync server by editing the /etc/default/rsync file and change false to true.

Now you start the rsync server as follows:

Now we add a firewall rule to allow the backup server to get the backup files as follows:

It is assumed you will be using Ubuntu 8.04 LTS for the backup server. If so, do the following to set it up as the backuppc server.

Login and become the root user.

Create a firewall rule for each client to be backed up as follows:

Now test your rsync connection to each client as follows:

You should get a listing of the backup files in the clients /opt/backup folder.

If the above is successful then install backuppc on the server as follows:

BackupPC has a web interface which you enable as follows:

Now we add an admin backuppc user as follows:

Now open a web browser and type the following into the address bar:

You will be prompted for a username and password, use the following:

You should be presented with a screen like the following: 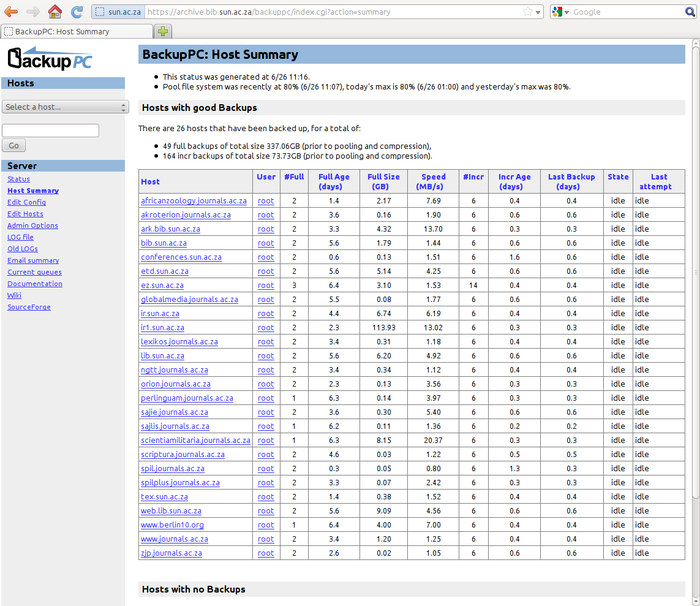 Now setup backuppc by adding host configurations. There is plenty of backuppc documentation out there.

However, below is a screenshot of the critical configuration of Xfer settings per host that uses the rsync server on each client. Check out highlighted boxes in red.

Continue to setup backuppc as needed. That's it.

Now that you have a large number of servers you would like to know how they are performing and be informed of potential problems. At our library we use munin to do this.

Login and become the root user. Install munin as follows:

Setup munin to allow the monitoring server to gather statistics as follow:

Add the following to the bottom of the file:

Save the file. Run the following command to check what stats are available:

Add a firewall rule to allow the monitoring server to get the stats:

It is assumed that you will be using the same server for monitoring and backup. To setup munin to gather client statistics, follow the procedure below.

Add a firewall rule to allow the server to get the stats:

To install munin, type the following:

Add the clients to the /etc/munin/munin.conf file as follows.

Open the file for editing.

Add one of the following for each client:

Wait for about 5 to 10 minutes for munin to gather data and then check out the stats as follows.

Open a web browser and type the following in the address bar: 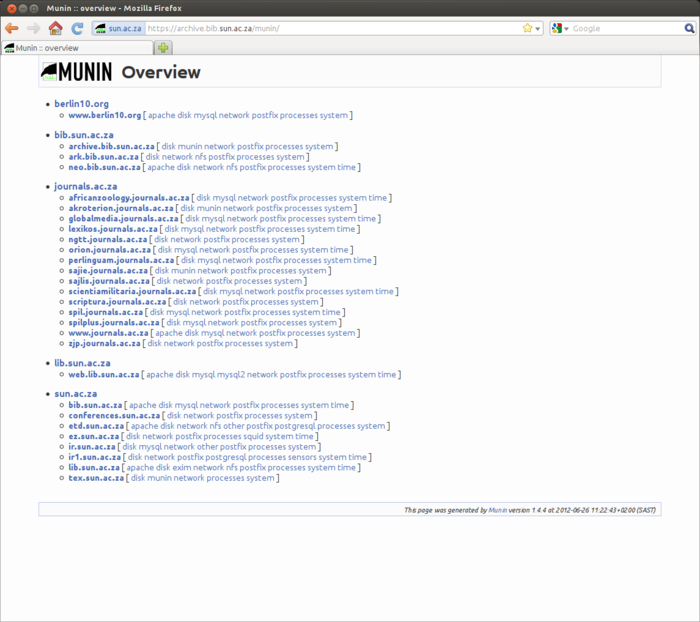 Thats it. As usual there is a lot of documentation about Munin out there.

Go to: http://www.ubuntu.sun.ac.za/wiki/index.php/SelfHelp for more help about the command line programs used in this procedure.